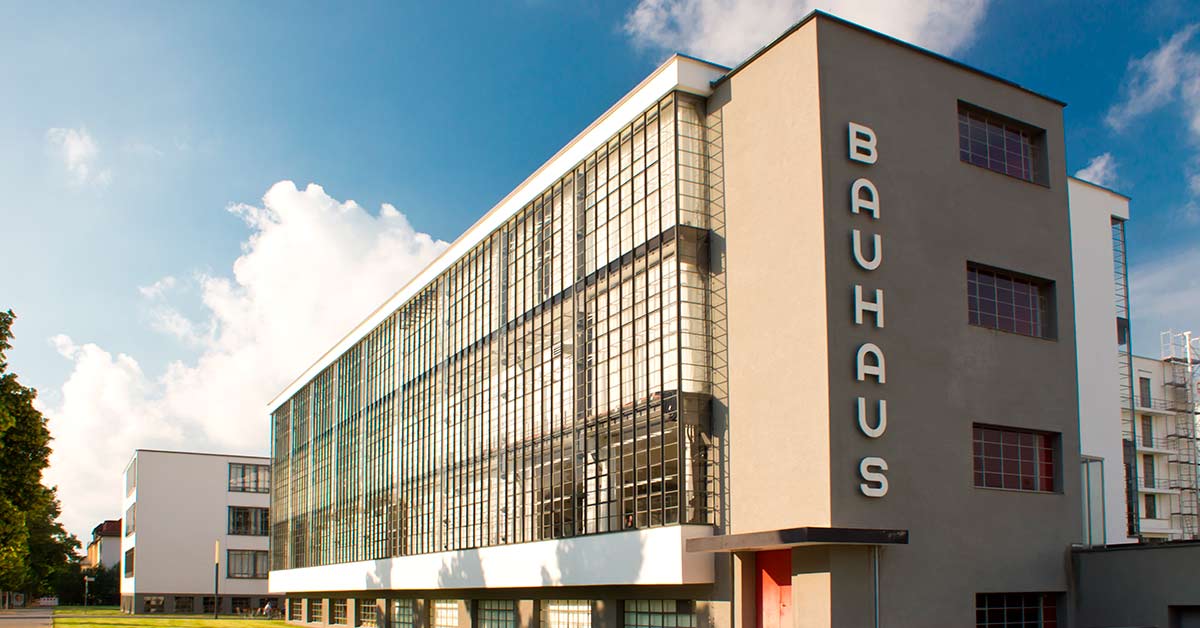 In 1919, the architect Walter Gropius founded the Bauhaus school in Weimar, with the aim of combating mass-produced products.

He wanted to offer modern, economical and functional alternatives to industrial production.

With this school, Gropius wanted to bring together arts and crafts, to “create a new guild of craftsmen, without the distinctions of class that erect an arrogant barrier between craftsman and artist”, as can be read in his Manifesto, within which he does not use half terms and declares:

“Architects, sculptors, painters – we must all return to the craft!”

Through a combination of influences from modernism, the English Arts and Crafts movement and constructivism, the architect Gropius promoted the idea of functional design that served the community.

Bauhaus and the modern and simple design

The basic design principle of the Bauhaus school movement is “form follows function”.

According to this idea, simple and elegant geometric shapes are designed according to the intended function or purpose of a building or object.

Architect Gropius firmly believes that construction should be “the ultimate goal of all artistic activity”.

That’s why his students not only worked in university seminars, but were also sent to construction sites, where they could closely explore the typical theory of Bauhaus design, colour and materials.

Thanks to these experiences, the students designed simple furniture and objects for everyday use, taking into account the most important thing: to maintain a refined elegance.

Many prototypes have entered mass production, such as Bauhaus wallpaper produced by Rash of Hanover and the famous black Kandem desk lamp by designer Marianne Brandt.

The wallpaper was very successful, thanks to its solid patternless colour without particular textures, adaptable to any type of environment.

The Kandem lamp, on the other hand, has been copied by many companies, in a more affordable version for a wider range of customers.

The uniformity of Bauhaus design has three basic criteria:

The colour was disapproved, while natural materials for facades and structures with metal profiles had to be highlighted.

The architectural design of the Bauhaus also developed in urban planning, with new houses designed to cope with the housing shortage in many cities.

Architect Gropius wanted to solve the problems of urban buildings by designing mass constructions, i.e. totally standardized residential complexes, composed of a limited number of building elements, all made in factory.

In 1923, prototypes for the Bauhaussiedlung, a residential project on the outskirts of Weimar, were shown, as were the school’s first works on town planning and subsidised construction.

Alongside the study models of the honeycomb houses called “Wabenbau”, there are also models of single-family houses built by Gropius himself.

Among these, the house built with the “Baukasten im Grossen” system stands out – literally, a large construction kit – where six residential blocks can be assembled in different ways depending on the number of inhabitants.

The innovative scope was high, but political tensions led to different school closures.

In 1925, a dispute with the new Conservative government in the state of Thuringia forced the school to move to Dessau, establishing its headquarters in a new light and airy building designed by Gropius, with a glass façade a year later.

When the Nazis gained control of the city council there, the school closed again in 1932 and was reopened in Berlin, to be closed permanently in April 1933, under pressure from the Nazi regime, which criticized the Bauhaus for the production of “degenerate art”.

The spread of the Bauhaus and its centenary

Even though the Bauhaus school was closed, several members – after fleeing Germany – continued to spread its idealistic concepts.

Many Jewish architects from the Bauhaus school contributed to the construction of the White City of Tel Aviv, where some 4,000 buildings were designed in the Bauhaus style and named a UNESCO World Heritage Site.

Although many people today tend to associate modern, inexpensive and modular furniture with Ikea, the concept was not born in Sweden, but is inspired by the classic works of Bauhaus designers.

100 years after its foundation, the architectural style of the German Bauhaus movement is still iconic and relevant. Its design has not lost its impact and is now considered one of the most significant German cultural exports of the 20th century.

← Electric blinds: easy to install, beautiful to look at How to furnish a pet friendly home →