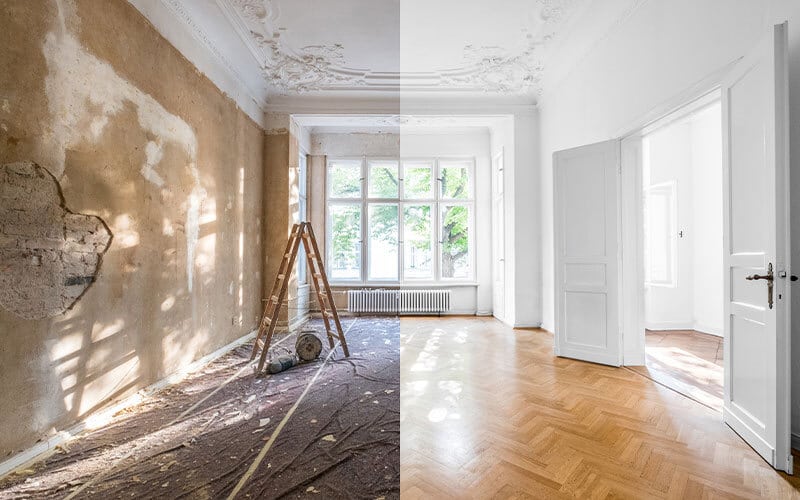 Who pays for home renovations in TV shows?

Over the last few years, more and more home renovation shows have appeared. These shows have a large and devoted audience that regularly follow new episodes where participants entrust their entire homes – or just a few rooms – to experts who then completely transform their properties.

In one single episode, audiences watch a summary of weeks and weeks of work where projects are initially developed and then executed.

This is all sounds very impressive, but it certainly doesn’t come cheap for the participants as, more often than not, these shows don’t pay for the actual renovations.

While the specific rules vary depending on the TV show, the general rule is that homeowners will get a complete renovation as long as they are happy to finance the work.

Home renovation shows: how to become a participant

Participants of these shows are usually offered discount rates and consultations with architects and interior designers, but it’s generally necessary to have a good budget from the start.

Yahoo Finance published an interesting article explaining the entry requirements and rules for participating in some of these shows.

Let’s take a look at who pays the bill in some of the most famous home renovation shows.

Owners need to have a budget of at least 150,000 dollars and must leave the property during the renovation work.

This means that, as well as the budget to transform the farms, they need to have funds to live elsewhere unless family and friends can help.

Their new TV show is now called “Outgrown” and focuses on renovating the homes of growing families.

However, taking part in the show is quite expensive, as families need to have a minimum budget of 75,000 dollars.

3. Home Again with the Fords

“Home Again with the Fords” is presented by Leanne and Steve Ford who help participants move back into the houses they grew up in. The challenge is to renovate these homes while also respecting their past and their memories.

The minimum amount required to invest in renovation and be part of the show is 80,000 dollars.

In “Love It or List It”, estate agent David Visentin and designer Hilary Farr battle against each other in an interesting challenge.

One of them tries to find a new place for the owners, while the other begins renovations on the house. At the end of the episode, the owners decide whether they want to stay or relocate.

The participants might appreciate the professional advice but, to be part of the programme, the owner’s budget should be at least 75,000 dollars.

“Nate & Jeremiah by Design” was a TV show broadcasted between 2017 and 2019 where Nate Berkus and Jeremiah Brent helped families with renovation problems.

To be part of this programme, owners had to have a budget between 40,000 and 60,000 dollars. However, it could still be seen as a good opportunity considering the talent and experience of the two American designers.

Over the years, Chip and Joanna Gaines have renovated and redecorated many homes in “Fixer Upper”, making this TV show one of the most popular of its kind.

A new season will likely be broadcast on Magnolia Network in 2022 as castings are open to participants who live within a 30 miles radius of Waco, Texas.

One of the participation requirements is to have a budget of at least 50,000 dollars.

Lyndsay Lamb and Leslie Davis are estate agents that invest in making minor renovations on homes that have been on the market for a while.

When the house is sold, they recoup their initial investment and split the profit with the property owner.

Renovating your home while participating in a TV show

Are you a homeowner who enjoys renovation reality TV shows and would like to participate in one of them? Whether you need to refurbish an underutilized space of your home or even your whole house, there is undoubtedly a TV show for you – just remember that you will have to invest a substantial amount of money in the project.

If you have a reasonably high budget, you could apply and perhaps benefit from the experience and help of industry professionals who will transform your old house into a dream new home.