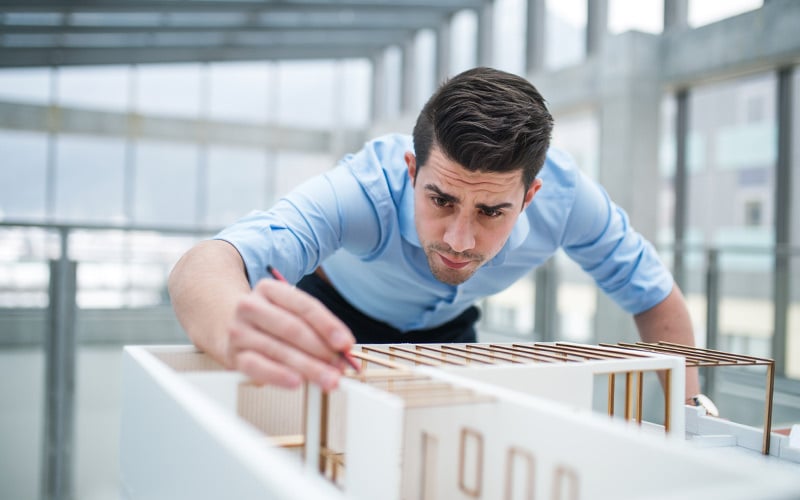 In1981, the architect Renzo Piano created the Renzo Piano Building Workshop (RPBW) with offices in Paris and Geneva.

The Renzo Piano Building Workshops has developed 140 projects worldwide, including the Academy Museum of Motion Pictures in this article.

In most cases, projects are developed by multidisciplinary teams, and a group of architects is involved from beginning to end.

Each architect offers his or her consultancy and architectural design expertise during the whole process. However, the competence and the knowledge of the team goes well beyond that as they also include interior design, urban design, and landscape design.

Francesco Terranova is a modeller for the Renzo Piano Building Workshop at their office in Genoa. He can create complex architectural models using a calibrated mix of classic tools and new technologies like 3D printing.

Let’s look at his experience at RPBW using 3D printers, thanks to his interview with Formlabs.

One of Renzo Piano Building Workshop’s strong points is the so-called “Design to Build.” This approach guarantees that every detail will works perfectly when built.

For every project, hundreds of models are produced in smaller and larger scales to test all the different options and choices.

This passage is essential as it’s around these models that all the team members gather to brainstorm and propose new design solutions.

Architects frequently try out their modifications directly in the models and, if they work, they can then be worked on and added to CAD projects.

Models play a crucial role because, as clients visit the studios to hear how the project is developing, they can see it with their own eyes in a very tangible way.

As Francesco Terranova puts it:

“Our models change every day or even every hour. Because the architects change the project very quickly, most of the time, we don’t have enough time to do it by hand. Therefore, we have to find a way to do it quicker,”

The SLA Form 3 printer, for example, is one of the most used to create scale models.

Scale models: how they are made

As we already mentioned, model makers use a combination of traditional tools and digital technologies like 3D printers, CNC, and laser cutters to create different parts of a scale model.

“We normally start printing the model in scale on paper to understand the real size of the model. If we have a model that is 1 meter by 1 meter, we have to understand how to divide it because often, if the model is too bulky to be moved or transported, we must consider building it already divided into two or more pieces, to be reassembled once it reaches its destination.”

3D printing is ideal for creating geometric shapes challenging to produce by hand, like spheres and curved surfaces, as this technology enables you to recreate precise models as seen in a 3D file.

Model makers use 3D printing anytime they can as it’s a great tool for those tasks, especially for complex parts like stairs and trees that would usually be very time consuming by hand.

For example, the new joints connecting the columns of the new motorway bridge of San Giorgio in Genoa, built after the Ponte Morandi disaster, were printed in 3D.

These files usually include all project details and layers (pips, tabs, furniture, etc.), and model makers need to clean them first and decide on the best approach to scale these projects.

The Genoa studio got their first 3D printer six years ago, and since then, many different ones have been tried and tested, until today where three printers based on three different technologies are in use at the studio.

“Six years ago, we started with a powder-based machine [that uses binder jetting technology]. It was not very useful because it was very sensitive to the humidity, and the precision was not what we needed. So, we moved to The Form 2, [which uses stereolithography (SLA) 3D printing technology]. Then, we added a 3D Systems [large-format material jetting printer] that prints with resin. And we also have a small FDM 3D printer that works with PLA and ABS.”

The studio has recently updated its Form 2 printer to a Form 3 SLA from Formlabs, which can print more complex models saving time in the post-production process.

Francesco Terranova thinks that, in the future, 3D printers will be essential instruments in most labs and architectural design studios.

XThis site uses first and third party technical, analytical and profiling cookies. By closing the cookie banner, using the "X" symbol, you will continue to browse in the absence of profiling / marketing cookies, accepting that only the cookies necessary for the operation of the site are used. You can consent to the use of other cookies on the site by clicking the "accept all cookies" button. You can also customize your experience by clicking on "options".
Read MoreCookie settingsAccept all
Manage consent

This website uses cookies to improve your experience while you navigate through the website. Out of these cookies, the cookies that are categorized as necessary are stored on your browser as they are essential for the working of basic functionalities of the website. We also use third-party cookies that help us analyze and understand how you use this website. These cookies will be stored in your browser only with your consent. You also have the option to opt-out of these cookies. But opting out of some of these cookies may have an effect on your browsing experience.
Necessary Always Enabled
Necessary cookies are absolutely essential for the website to function properly. These cookies ensure basic functionalities and security features of the website, anonymously.
Functional
Functional cookies help to perform certain functionalities like sharing the content of the website on social media platforms, collect feedbacks, and other third-party features.
Performance
Performance cookies are used to understand and analyze the key performance indexes of the website which helps in delivering a better user experience for the visitors.
Analytics
Analytical cookies are used to understand how visitors interact with the website. These cookies help provide information on metrics the number of visitors, bounce rate, traffic source, etc.
Advertisement
Advertisement cookies are used to provide visitors with relevant ads and marketing campaigns. These cookies track visitors across websites and collect information to provide customized ads.
Others
Other uncategorized cookies are those that are being analyzed and have not been classified into a category as yet.
Save & Accept